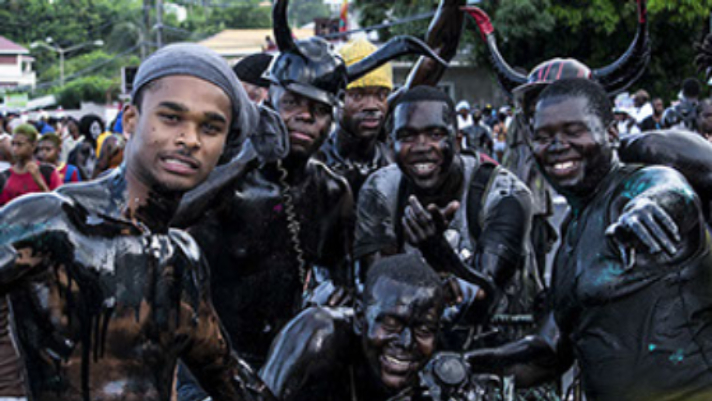 1- Grenadian Jab Jab have a uniform– Now, you may ask, what is the jab jab uniform, well according to King Boyzie. The jab jab uniform is Ole oil and a dirty thong. Now you might be asking yourself, why dont the jab jab wear a clean thong? I ask myself the same question every day so if you get an answer let me know.

2- Grenadian Jab is not bilingual– So apparently the jab doesn’t Habla Espanol, only English. I have always wondered why I stopped playing jab and this point might explain why simply because I Habla Espanol so that’s why I can’t be a jab.

3- Grenadian jab love saltfish– This one may be obvious but when the jab jab cooking saltfish he does soak it good. The jab also loves putting fig and zaboca in his saltfish.

4- Grenadian jab jab believe in the 10 commandments: They were created by Synnah and are as follows

6- Jab jab went on a cruise– Apparently in 2015, jab jab snuck away on a cruise and ended up somewhere in America. Everyone was looking for the Grenadian only to find the jab on sesame street, true story.

7- Grenadian Jab don’t care– in case you are looking for someone to care then don’t go to the jab because jab don’t care.

9- Jab rolling with a big snake in a cucus bag– I will leave this one up to you for interpretation.

10- The jab favorite color is black– Sooooo they ask the jab what’s his favorite color he said black, they even brought him by the bar and he only wanted to drink jack. Jab is weird