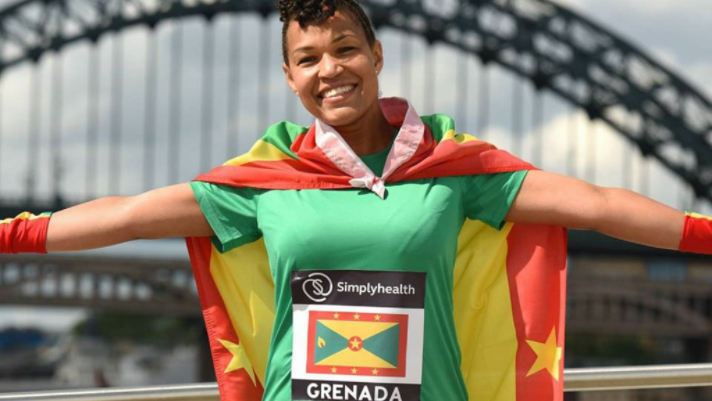 Ah worked in Rex and La source and at one point I was working in both hotels at the same time and still found time to party. I left the Island, got married and had three children. We travelled, worked, studied and lived in many countries including India before finally settling in England.

In 2016 a work colleague asked me to take part in this big running event where they wanted people to represent their country of birth. This event was The Great North Run. World famous and largest half marathon (13.1 miles). Well meeno runner so I told her “no, I too lazy fuh dat”. I used to come last in primary school cross country and after work I used to run straight to meh bed so I was no runner!

Well, I decided to give it a try. I told de Race organizers I was from Grenada. They were surprised to find a Grenadian living in the North East of England. It was then I realized that a lot of people up here did not know where Grenada was. So I made it a mission to educate them Next ting ah kno dem people made meh poster gurl wee! Ah waz on BBC Radio doing a full interview, ah waz on ah full page en de newspapers here, ah waz en de newspapers en Grenada. Ah waz on de morning and evening news on T.V. Yuh couldn’t miss meh! The Great North Run company had meh splashed all over their social media. The radio station called meh back in to do an advert fuh dem and ah even end up on Google! Dey real liked de Grenadian. 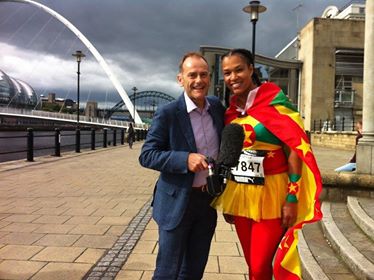 People started calling me ‘Grenada, ‘Vanessa from Grenada’ They started recognizing the flag and asking questions about Grenada and I am sure many have googled ‘Grenada’ to find out more. In an interview, I said I will run the 13.1 miles with a large Grenada flag on my back. The day of the race 57,000 people gathered (that’s nearly half the population of Grenada in one place). There were many other countries, but most people instantly recognized me and my Grenada flag. I didn’t just get a flag and put it on my back. I had a Grenada flag outfit! Dem ppl musta been wondering wey dah mad gurl come from… if yuh de see meh! Lol I got a live interview before the race and during the race I got pulled out to do another interview. All this was live on national television (BBC one).

As I ran past, people were shouting and cheering me on. I heard “go Grenada”, “Come on Grenada, you can do it” “She’s been on t.v. this morning” It filled me with so much pride and joy at one point I just wanted to cry. It was nice hearing people say GRENADA. The campaign was so successful they asked me to do it again in 2017. 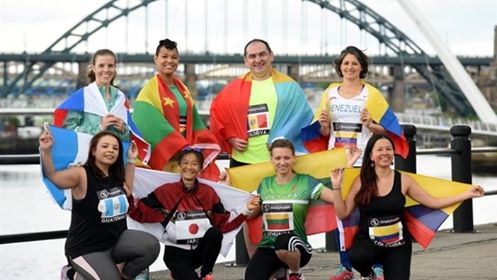 The organizers invited me to speak at their annual conference. I was just like their other celebrity speakers. Mee wee papa! I was asked to do some promo work for The Great North Run organizers and Birmingham City Council to help them secure the bid for the Commonwealth Games 2022. There I met and ran with past and present Olympians and World Champions and a handful of other commonwealth countries. Grenada was clearly the favorite among the countries. BBC Television invited me to their studio in Manchester to do an all day filming of a advert which was aired nationally. The day of the race I had another outfit to run in. I still managed to in cooperate the big flag and run with it for. This time celebrities in the race thought I was a celebrity too. I was given celebrity treatment. This time more people knew about Grenada. While waiting to start the race a lady came up to me and said “Hello, I’ve been to Grenada and it is a beautiful place”. I smiled and said “thank you, it really is beautiful”.

I will be doing The Great North Run again in September 2018. I am currently training for my first Marathon (26.2 miles). I am already up to 18 miles in my training. Aye din kno aye coulda run all dat na! I mostly train alone as it is difficult to get someone to run with you for all that distance despite being in a running club. It had been tough training in the Winter months and running in the snow but the weather is getting better. 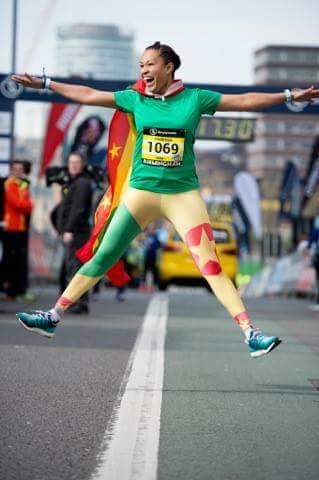 Other things I had to overcome in preparation for the marathon was staying injury free and changing my diet. Where I live, we do not get the typical Grenadian foods so I had to go to the Africa shop to get Yam and the Indian shop for Okras. I try as much as possible to eat healthy to stay healthy for my running.

My best advice to anyone, is it is never too late to start running. Yuh neva kno wey yuh go end up ..but at least yuh tried. I never thought in a million years I would be running in my forties and enjoying it so much and the best part is I get to tell everyone how beautiful Grenada and its people are.

My name is BUNGI / Vanessa and I AM Grenadian.