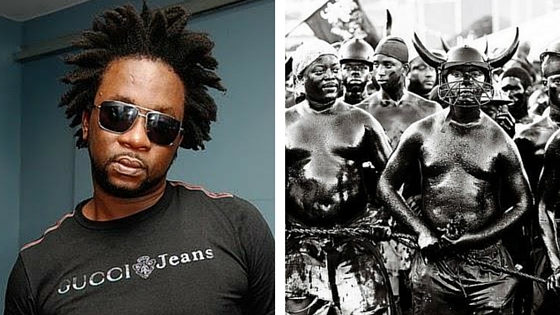 I have been meaning to do a sketch of the Grenadian personality, as I have come to witness its evolution in recent years. The intent is not to get clinical as it is to point out the social contours giving shape to a collective appeal or configuration of dispositions registered in the psyches of my people.

Since I will be speaking in sociological terms primarily, it might be best to state upfront the shift that I witnessed since the king of Jab gained prominence with the hit single “Old Woman Alone.” Tallpree or Wilt Cambridge’s “Old Woman Alone” serves as a watershed moment in the growth of the Grenadian personality. How exactly did an artist and his artistry able to gift his people with such a gift? On the one hand, it is precisely the job of artists to give greater life to the everyday living of the environs they represent; it is a sure means of gravitas, granted that the individual artists have what it takes in the people’s eyes. It surely is a two-way viewing process.

And, quite frankly, Mr. Cambridge did not meet the merit for wide acceptance by the Grenadian populace when he released his chanting lyrics in 1999, in the form of a bona fide song: “Old woman alone we taking home…” The groovy beat and humorous narrative did garner a bit of a fanfare, but not on the scale to win any award or prove to be the most popular song that carnival season. But the long-awaited opportunity came on the backend for this artist who had taken a detour from singing dub music for more than a decade before trying his hand at Soca in the latter years of the 1990s. I say backend because, as the story goes, it was the Trinidadian fans’ gravitation toward “Old Woman” that spurred greater interest in the song and the artist, making him the breakthrough artist the following year, 2000, since Trinidad and Tobago’s carnival is in February. “Old Woman” was the unofficial Road March song in Trinidad and Tobago in 2000.

The T&T revelers fell under the spell of the rawness and melodic pull of Mr. Cambridge’s zest for flavor, a flavor that came to be known as Jab Jab music. It must have reminded them of a more groovy period, when Soca music was more rhythmic and a bit slower paced as compared to the high tempo jump and wave craze that many fans by then were becoming complacent of. The richness of Soca music for the official birthplace of Calypso and Soca had taken a hit to the stomach, since almost all the big acts in the business were following the recipe of Super Blue of giving very specific instructions to the crowd to get them off the ground. Conversely, “Old Woman” anchored those feet solidly on the ground the way Tambo’s “We Ain’t Going Home” did before the Jump and wave craze came into prominence and dulled the artistry in the process, arguably.

Therefore, the endorsement by the more metropolitan and Calypso/Soca sophisticated Trinidadian society could not be more revealing that there was, indeed, something quite special about “Old Woman.” Mr. Cambridge to date had many follow-up hits, including “The Grave, The Jail, and The Hospital,” my personal favorite, and has demonstrably given life to a sub-genre in that of Jab Jab music. He has represented such genre throughout the region and internationally more than any other performer, as well as collaborating with other prominent Soca stars, such as Machel, Bunji Garlin, Fyann Lions, Allison Hinds, to name a few.

Let’s take a step back, for a sec, from the triumph of the tenacity of this one personality, in that of Mr. Cambridge, and view the environment that did not perceive his offering as one to be taken seriously in the first place, to gain an appreciation of his contribution in the elevation of his people’s personality (as in their disposition toward themselves and others vis-a-vis the prism of self-acceptance and affirmation). What we are talking about is nothing but self-esteem in a people and its effects as manifested.

Many might recall the stark increase in all things Grenadian after the wide acceptance of “Old Woman”, not just by T&T fans, but throughout the region, at the dawn of the new millennium. The wearing of the national colors, red, yellow, and green, was obviously put on greater display, both individually and collectively; people were no longer shy to flaunt their pride in being Grenadian, domestically and internationally. Prior to such event, there was a repressive attitude among nationals, whereby the crab-in-a-barrel syndrome was more rampant; thus, there was widespread aversion to celebrate each other. In that context, people were markedly overly critical of each other, especially if such persons were deemed to be attempting to project more than their “social worth.”

The revolutionary quality in “Old Woman” is the fact that the song captures a rawness about the Grenadian society which only the appeal of Soca can render adequately. In its depiction, the song seeks to elevate a sexually disfavored section of the population, old women, by persons in a profession that are notorious for their advances toward the blooming females of the society, school-age girls. The attraction can be seen as mutual between the young ladies and bus drivers and conductors. Then there is the reputation entertained, and rightfully so, by bus drivers and conductors that they are not held in high esteem for the invaluable service they perform in the life of the nation, which could be a factor in their propensity to want relations with these yet entrenched members of the society. In the spirit of carnival, the song turns that given reality on its head (in a subtle and questioning manner) by stating emphatically that this driver is exclusively in the business of catering to old women. And to reinforce the point, he is seeking the assistance of others to perform this noble act of kindness. Again, in the tradition of the artform such kindness has its double meaning, as it is not merely one to be interpreted non-sexually. In other words, the metaphor is inescapable to its audience, in that this driver is more than a driver. To validate his position, he does a bit of slight bashing of the otherwise favored younger women, with mentioning the presence of STDs among members of that group.

There is absolutely no doubt that Tallpree is negotiating his own position in the Grenadian society, both in the vein of an artist and beyond. He has interpreted his role on many levels, since he, too, is representing the periphery of that order, which was made more obvious in the lyrics of “The Grave, The Jail, and The Hospital.” In this song, he is lamenting that he does not have much to lose in his striving, since he is not privileged, and thus he isn’t afraid of the grave, the jail and the hospital. To send home the message, he highlights a typical narrative of the majority of people in his position, in that of the huge sacrifices made by his mother (and other relatives) to secure his/their survival (in the least). As a result of not being privileged, Tallpree also exhibits qualities that are emblematic of such upbringing. He is creative and likes sharing his creativity and love for the artform, but beyond that Tallpree is also a bit bashful. It’s most obvious when he is not fully in his jab jab mode; when he is doing interviews or sometimes collaborating with other stars who are more prominent. Nevertheless, he tries his best to overpower it with his heavy and animated voice and artist persona; but make no mistake, the sense of deficiency (more than defiance) is very much implanted in him, as it does in most Grenadians his generation and older. Deprivation was the carver of this particular trait, for it was identified with on a wide scale in the population in many respects, and thus always surfacing in the personality of its hosts, even after they have acquired material and social successes as Tallpree has. Thanks to him Grenada has its own niche within the world of Calypso/Soca for the first time, giving multiple artists a solid platform from which to launch their careers. Consequently, many are taking advantage of this platform, by all means, most notably Skinny Banton and the group Cloud Five from the sister isle, internationally. Locally, Lava Man, Shortpree, Squeezed Head and others are pressing on the gas with great excitement, indeed, and are also making waves beyond the Grenadian shores. Both the local and regional/international audiences cannot have enough of the infectious beats and out-of-this-world lyrics.

By all accounts, the inferiority complex our people took on as a result of their endurance of countless material, social, and psychological abuses from slavery and colonialism to their vestiges in contemporary times is a most daunting challenge. In that vein, every time we as a people embrace who we are, as was the case with the Jab tradition within the carnival experience, the stronger we become, and are better equipped to throw off some of the dead weight that is still wearing us down socially and otherwise. Our cultural products ought to ultimately bring the monetary and economic gains that will cement our African/Caribbean personality and the authenticity of our way of life as a self-defining people, outside of other contributing items. It’s the only true route to healing from the grave injustice and dehumanization we have suffered as a group. Make no mistake about it, jab represents the best quality of our African spirit. It honors the connection that we have with nature through the grounding effects of melanin to the universe. Jab is paying homage to that connectivity. It’s our cosmology from which our psychology ought to be rooted. Now, it is our duty to harness the power that it affords us beyond the realm of carnival, like true art always seek to do: render a reality that is greater than the reality that does not represent the best of who we are as a group.