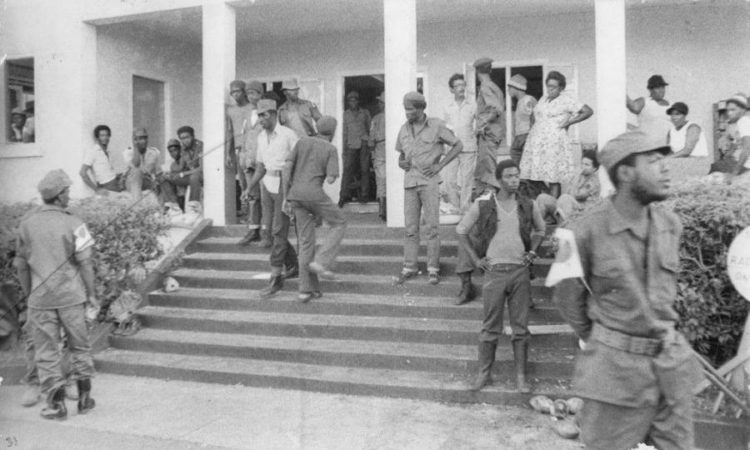 This article is taken from Now Grenada. See the original here- http://nowgrenada.com/2017/03/the-grenada-revolution/

On 13 March 1979, members of the New Jewel Movement (NJM) overran the Grenada Defence Force (GDF) Headquarters at True Blue and began what became known as the Grenada revolution. The NJM later claimed that the hastily planned and executed coup d’état was triggered by intelligence received from within the Police Force concerning a plan by Prime Minister Eric Gairy to have them detained and subsequently eliminated (as proof eight secret underground cells at the prison were reportedly intended for the detention of the eight-member NJM Political Bureau). It is interesting to note that two NJM members were arrested in the United States in February 1979 on charges of illegal arms shipments; they fled the US in late 1979 while on bail. The US government, investigating the case in Grenada, led to the arrest of an NJM member, forcing the remaining leaders underground. It was then that the NJM leadership made the decision to stage a coup that had been in the planning stage.

Burnt out remains of the Grenada Defence Force Headquarters at True Blue, St. George on the morning of 13 March 1979. Courtesy of the Grenada National Museum.

About “forty-five members” of the NJM ambushed and set fire to the GDF barracks at True Blue around 4:15 am on March 13, forcing the majority of the soldiers to flee for their lives. Radio Grenada was captured without a shot being fired. At 6:15 am the NJM announced over the radio station that they had overthrown the government of PM Gairy. They called on police stations across the islands to surrender peacefully. Detained ministers of the Grenada United Labour Party government discouraged any resistance to NJM forces. At 10:48 am Maurice Bishop broadcasted a message to the country and called on all Grenadians to support the armed revolutionary forces under his command. In his message Bishop assured the country that all democratic freedoms would be restored as soon as possible. He outlined the objectives of the revolution as being for “food, for decent housing and health services, and for a bright future for our children and great grand children.” Bishop also promised that “…all democratic freedoms, including freedom of elections, religious and political opinion, will be restored to the people.”

Throughout the day Police stations across the islands surrendered to NJM forces by hoisting a white flag, and little or no gunfire was exchanged by either side. Forces loyal to PM Gairy gathered at the police headquarters at Fort George in an attempt to mount armed resistance, but realised that their attempt would be futile since most of the island was under the control of NJM forces. By 5:00 pm all police stations across the islands had surrendered, and most government officials, top military and Police officers were detained. Two people died in the course of the takeover on March 13, and one indirectly. Throughout the day activities were subdued, yet some businesses were open and a Russian cruise liner was docked on the Carenage, its passengers going about their business of sightseeing.

The NJM had taken power by means of a coup d’état, the first in the English-speaking Caribbean (Castro described the coup as “a successful Moncada,” referring to his 1953 failed attempt to topple the Batista regime in Cuba). Though taken by surprise, the majority of Grenadians expressed their support for the coup and the NJM. Many saw the revolution as a new beginning for Grenada following the economic and political turmoil of the 1970s.

Visit the Grenada National Museum for an exhibition that provides a detailed look at the events that led up to the Grenada Revolution in 1979, the four and a half years Revolution, and its demise following the executions of Prime Minister Maurice Bishop and others on 19 October 1983, and the US-led invasion on 25 October 1983.

An article by Harold Hoyte (of the Nation, Barbados) on the “Underground Secret of Sir Eric.” Courtesy of the Grenada National Museum.

This article is taken from Now Grenada. See the original here- http://nowgrenada.com/2017/03/the-grenada-revolution/