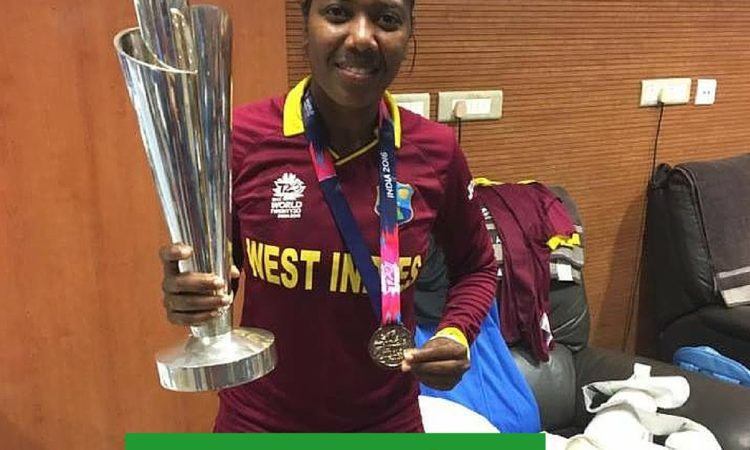 My name is Afy Fletcher. I am originally from La Fillette, St. Andrew’s. I attended the St. Mary’s R.C. School then the St. Andrew’s Anglican Secondary School (S.A.A.S.S.) before heading off to T.A. Marryshow Community College. Admittedly, many may know me as a cricketer, but I have been heavily involved with football also. I learned to juggle a football in my backyard with my sister using a “Klim” branded ball. Later, I often went to our local playing field, Boulounge Park, to play football with the guys. When I was at S.A.A.S.S., I even played and scored on a few occasions in the Inter-form Football Tournament with the boys of my form since there was no female competition. Later in my secondary school tenure, the Female Inter-secondary School football competition began, and I helped my school secure its first title. In 2001, I made Grenada’s National Women’s Football Team and played for many years. In 2012, I completed a referee officiating course, and now I regularly serve in the capacity as an assistant referee at the local level.

My cricketing career took a similar path. It first began in my home village then continued at school. I started playing cricket as a little girl while growing up in La Fillette, and at S.A.A.S.S., I always played and captained my form team in the Female Windball Inter-form Cricket Tournament. Later, I got involved with hardball cricket through Denison Thomas, who always seemed to be knocking a tied up ball in a sock. As time went by, I frequently went to Boulounge Park, the home ground and the place where our village club, Idlers Cricket Team, trained. Eager to learn, I first observed what the cricketers did to better familiarise myself with the game. I initially looked at their training sessions with great intrigue then eventually began participating. As my confidence grew, I began bowling the guys during training. Over time, I developed the leg spin, and with regular, competitive training I became better at that bowling style.
In 2002, I was selected for the Grenada National Women’s Team, which I currently captain. Later, I was named the vice-captain of the Southern Windward A Team. With many years of training and playing on the local and regional levels, my ultimate dream of representing our region on the international stage became a reality. In 2008, I was blessed with the opportunity to make my debut for the West Indies Women’s Team. After a few tours, I was out of the international arena for a while; however, I never gave up on making the West Indies Team again. Admittedly, my absence spurred me on to train harder, improve further, and perform better to earn another chance. Consequently, my hard work didn’t go unnoticed, and in2015, I was recalled to the West Indies Women’s Team.
In 2016, I was fortunate to participate and help win the ICC Women’s T-20 World Cup with Team West Indies. Winning the tournament was quite special because it was the first time the West Indies Women’s Team won the trophy, and it was my first championship with the team. Upon reflection, the many hours of hard training, the countless sacrifices and unwavering show of support from my family, the encouragement from my friends, the trials and in some cases disappointment I endured paid off at what many may consider as the pinnacle of the sport.
Honestly, I have never been comfortable abiding by society’s definition of normal, especially for young ladies. My encouragement to all, particularly to young females is, to be ambitious, don’t settle for less, and don’t be afraid to go after what you want. With the correct mindset, much can be achieved. Like Steve Jobs said, “Your time is limited, so don’t waste it living someone else’s life. Don’t be trapped by dogma – which is living with the results of other people’s thinking. Don’t let the noise of others’ opinions drown out your own inner voice. And most important, have the courage to follow your heart and intuition.” My Name is Afy Fletcher, and ‪#‎IamGrenadian‬