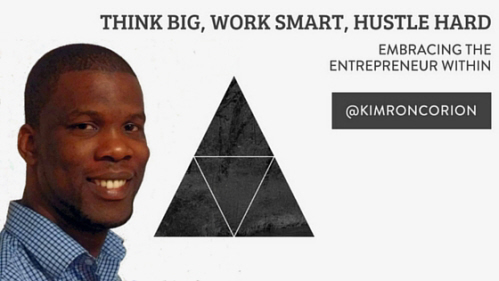 Think big, work smart, and hustle hard are the battle cries I am sounding as I fight my way through life with the dream to attain success. But what exactly does this entail? I believe my rallying call covers the whole essence of what persons should utilize whether as an entrepreneur, an academic, or otherwise. However, as entrepreneurs, I believe the following principles should be adopted to accelerate the realization of our goals.

I first realize that many of the failures that some persons encounter during their lives are because they limit themselves. Many unsuccessful entrepreneurs I have met over the years thought small and were comfortable with their limited thinking. Donald Trump said this famous quote, “I like thinking big. If you’re going to be thinking anything, you might as well think big.” I am a fan of Donald Trump because he inspired me through his writings to start thinking big and to encourage everyone I meet to think big. Unfortunately, I have never met Mr. Trump, but I enjoy reading his enlightening books. My favorite is The Art of the Deal, and I also love The Midas Touch which was also co-authored by Robert Kiyosaki.

To think big, one needs to be focused, have a clear vision, have something to be accomplished, and work towards the desired goal in a passionate way. Thinking big does not mean an individual has to start doing something big; instead, one can start small. Almost everyone begins small regardless if it pertains to a business or some other venture. However, to continue making strides persons should not limit themselves to their current positions. One needs to see beyond where he or she presently is to move beyond that existing situation. To think big, an individual needs to have the mindset of a champion, someone who will be victorious and do something life changing. Also, thinking big will imply that some form of risk will have to be taken. Generally, anything that is worth doing will have some level of risk involved, and we need not be afraid of the inevitable. People may make fun of those who take such risks, but as Steve Jobs said, “While some may see them as “the crazy ones”, we see genius. Because the people who are crazy enough to think they can change the world — are the ones who do.”

The concept of working long hours or not sleeping while trying to get things done is overrated. With the advent of technology, it has become much easier for persons to accomplish certain tasks properly and more efficiently. In October 2013, at the One Young World Summit in Johannesburg South Africa, I listened to Arianna Huffington speak about the “Third Metric of Success.” Her lecture made me start reflecting on my life and the long hours I was working. I realized that this third metric, “well being” needs to be taken more seriously.

Whether one is an entrepreneur or not, he or she needs to employ the resources available to him or herself to be able to work smart. In addition, the individual has to ensure his or her wellbeing is a top priority. Therefore, to work smart, persons need to get enough rest then prioritize or focus on what is important and what needs to get done first. Getting help is also an important aspect of working smart especially when there are lots to get done. It is always wise to have others involved as opposed to struggling while doing everything alone. As briefly mentioned earlier, one should use the technologies that are available. As a businessman or entrepreneur, there are thousands of online resources available that can be used to work smart. In my post, “6 Online Resources to Make Your Life Easier as an Entrepreneur,” I highlighted some of these resources that entrepreneurs can and should utilize. Finally, individuals should not try to take on more than he or she can handle. It is okay to be ambitious, but it is also wise for one to know his or her limits. Some people think they do not have limits, and I wish them luck.

To be successful, it is important to remember to work smart, not hard.

For some reason, the word “Hustle” seems to have a negative connotation. When I use the word hustle, some people automatically link it with dealing drugs or other similarly questionable activities. However, the negative insinuation the word hustle unfortunately carries is far from true when I use it. Whenever I use the word, I am primarily speaking about sales.

As far as I am concerned, everyone one will meet in this life is a hustler, and those who have mastered the art of the hustle are those who will be successful. In my opinion, Steve Jobs is one of the best hustlers who ever lived. He had a great hustler’s ambition as was seen in his legendary pitch to Pepsico CEO John Sculley in 1983. Mr.Jobs hustled Mr. Sculley to work for Apple by telling him, “Do you want to sell sugared water for the rest of your life? Or do you want to come with me and change the world?”

If someone cannot hustle, it is imperative that the individual learns. Being able to sell will be an important factor that will determine the success of many. Many companies have great programs to teach people to sell. Some persons learn to sell in school while others like me learned about sales in the School of Hard Knocks. As a child, I was always selling. I remember selling envelopes to my peers in primary school. I was always surprised how they bought them and had absolutely no use for them or when one friend drew something cool, I would retrace it, make many copies, and sell to other schoolmates. Therefore, my hustling skills may have been realized earlier than some.
All in all, success and hustle, goes hand in hand.

Think Big, Work Smart, and Hustle Hard are and will remain the battle cries for my personal brand for a long time because I believe that with that motto success will eventually reach out and embrace me.