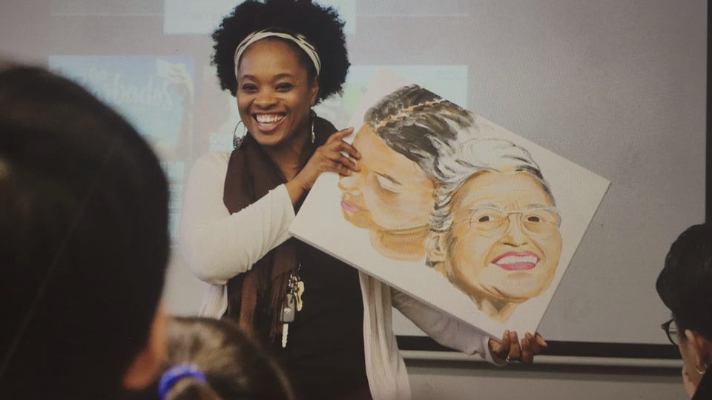 Today we talk to the amazing Karla “Kay” Kelman, a marketing professional, graphic designer, writer, studio artist and most importantly Grenadian. Kay shares her story with us from migrating to the United States in the 80s and pursuing that American Dream; she showed that she had that Grenadian spirit of resilience, excelling in everything she does. She became an artist and is currently planning an Art Exhibition, something that may not have come to fruition since she was told she wasn’t good enough and quit art for ten years.  Read about how she made her grand return becoming a leading artist and a voice for other artists like herself.

Tell me a little about who you are?

My family is from Belmont, St. George’s, Grenada. I grew up walking bare feet, climbing trees and swimming in the ocean at the beautiful Grand Anse beach. My parents migrated to the United States in the 1980s, and later, my siblings (Andrea, Ian-my twin brother, Helen, and Calrissa) and I joined my mom in Brooklyn, New York in the early 1990s. My mother later moved us from New York to Killeen, Texas, a small town outside of the military base, Fort Hood. My eldest sister Andrea had joined the army, and they thought it would be good to get us out of the city. You have to remember that NYC was pretty rough in the ’90s.

Although it was difficult, it was one of the best decisions she’d ever made. Moving to a different state in the U.S. gave us new experiences and exposed us to new cultures and ideas unique only to America. From there, I went off to Oklahoma in pursuit of my degree when I realized that I needed to take the course of my life into my own hands. Living in a single mom household forced me to make my way in the world. And for that, I am forever grateful. I learned how to build new relations, be resourceful and ultimately become resilient due to the stones, even boulders, life threw at me.

What do you do currently?

I am currently the Director of Marketing for Southlands Schools International. It is a private Christian school in California with several partner schools overseas. I am also a professional graphic designer, studio artist, and writer.

What were you doing before your current endeavor?

I’ve done a lot of things before becoming a Director of Marketing and an artist. In addition to being a wife of 19 years and a mother of two, I’ve been an assistant pastor. I owned and operated a restaurant; I’ve been a stay at home mom, worked in the medical field as an administrator, ten years as an AP (Advanced Placement) Studio Art teacher, as well as being a financial broker (which I still am, alongside my husband) with a couple of offices.

What inspired you to get involved in Art?

I was a nine-year-old girl attending Seventh Day Adventist school in St. George’s when I drew my first “good” picture. The teacher had a poster of a dolphin hanging in the classroom, and I drew it. I was in awe that I could do it, and so the first seed of love for art was planted. A few months later as I was walking home from school, I stumbled upon a tourist doing a plein-air painting of the city. I was captivated by the images and the way the brush and paint moved across the canvas. Whatever he was, that’s what I was going to be when I grew up.

You have an upcoming Artiste Exhibition, tell me more about that?

Yes, I am the founder and organizer of the upcoming La FEMME Artiste Exhibition. It is an art exhibition showcasing female artists of all art-forms. It is not meant to be a “feminist” thing but a female thing, which is very different. Women have been major players in the visual art world. Whether through being artists themselves or teachers, however, I believe that we are generally overlooked.

This exhibition is to highlight up and coming artists and celebrate their accomplishments. The inspiration came after having lunch with a friend who happened to be an artist and art professor. Shortly, after the luncheon, I met another female artist, and while talking to her, the idea popped into my head to do a collaborative show with the artists I knew. From that thought, it ballooned into a major exhibition featuring 20 artists and one writer living in Scotland. We are beginning to organize a much larger La FEMME Artiste Exhibition later in the year since we’ve had to turn away a lot of submissions.

What obstacles did you face on your professional journey how did you overcome them?

The obstacles I’ve had to face have been the same as any artist, woman, mother. I came from a home where my mother was a single mom with five children, so right of the bat; finances were a major hurdle. While I was pursuing my Graphic Design degree, I was always broke. I made just enough money as a full-time student to get by.

Throughout my entire college career, I did not own a computer…try becoming a designer without a computer. Another notable challenge was right after I received my degree I was told by an important person in my life at the time, I was not a good artist, and I should call it quits. So I quit pursuing art for about ten years. During that time, I became a wife and mother. One day, my husband Wil came home with an oil painting set and placed it into my hand. He encouraged me to get back on the horse and pursue art. Since that day, I’ve gone full throttle; from creating art to teaching it myself at the high school level.

What’s next for you in your journey?

The possibilities are endless for me right now. I stop putting limits on where I can go and what I can do with art a long time ago. My vision is to grow the La FEMME Artiste brand into a national and eventually, an international movement. Reshaping the way society sees art and the female artist.

What is your best advice for young people interested in Art?

The advice I give my students are the 3 Rs: build Relationships, be Resourceful, and be Resilient. Don’t wait for someone to give you anything; learn to communicate and have a voice. Advocate for yourself and if there are no opportunities available, create them yourself.

The vision is to bring recognition to women in all genre of visual art while inspiring future generations of young girls.  The exhibition is opened to the public and entrance is free. Most of the original artworks on display will be available for purchase with 100% of the proceeds going to the artists.