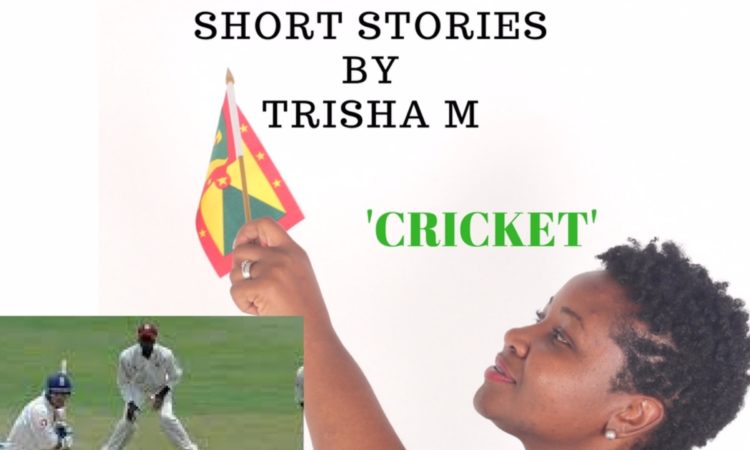 It was around 4:15pm after common entrance lessons and that evening she had decided to make the long trek up Pomme Rose hill instead of trying to brave Jordan hill. Normally this would mean that she planned to pass through Mr. Pallay land for some red plum before reaching home but not today. Today she just wanted to reach home as quickly as possible because… West Indies playing. It was Friday the day before the all-important third and final One Day Match against Australia, series tied 1 ah piece so ting hot.

Even as she walked up the road you could feel the excitement in the air. Passing by the rum shop you could hear the guys and dem arguing “Ah worried about dat Carl Hooper dey ha dey, the boy quick on he feet and could play you know, but ah doh know wah does be on he mind so d boy cyah concentrate to save he life!” Ah fella pipe up “Go an see is horn he mustbe getting horn so!” Laughter ensued trailing behind her as she sped up the road by Ms. Darrel.

“Ok do-do, ah hope you lawn well in school today.” Her grandmother who was sitting in the verandah replied. “Yes mamma”, she responded.

Finally reaching her gap, Melissa opened the gate and walked into the yard. Bruno the family dog, raced to meet her, almost knocking her over. Melissa, at 10 was barely 4 feet though stocky for her age; she petted him quickly, moving into the verandah – she had homework to finish.

Moving into the house, Melissa proceeded to the kitchen to see what it had to eat. On Friday’s all man had to fend for they self. “Mommy,” she called out. “Ah could take piece ah bread?”. “Yes,” her mother answered from the bedroom, “but take only a little piece, yuh Fadda doh eat yet and ah doh cooking tonight.”  “Daddy bringing KFC?” Melissa enquired “Ah doh know, just doh eat all, other people have to get, you greedy too much.”

Rummaging in the fridge Melissa found some anchor cheddar cheese and proceeded to fix herself a sandwich with the last of the lime juice, the brown sugar making it slightly thick at the bottom. She finished up quickly, knowing she had home work to do if she wanted to watch Zena, Warrior Princess that night.

About an hour later, Melissa just finishing up homework, heard the telltale change of gears coming up Jordan Hill that signified Daddy was coming home. Dat man does drive so hard, everybody knew when he passing. Sure enough, less than 3 minutes later she heard him pull up in the yard, the 6 ‘o’ clock news blaring from the speakers. Daddy never missed news, from BBC, to 535AM to the newspaper he was always listening or reading and insisted we do the same. It was Friday so Melissa knew he would have a copy of the Grenada Today for her to read. And this Friday was no different, he walked in and dropped the newspaper on the Kitchen table, but Melissa was more interested in the greasy brown and red paperbag that signaled the arrival of her favorite – KFC. The KFC in Grenada is hands down the BEST no contest! The original was well seasoned and doh talk for the spicy..woyee, yuh licking yuh fingers oui. When you peel back the skin you could see all the seasoning under dey.

“Joan come an share the chicken nah?” He called out. “Ah come back.”

Melissa sat there eating her thigh and fries, only half listening, the spiciness making her eyes water. “Daddy what time dey playing again?” she asked “9 ‘o’ clock in d morning” he answered. Mommy piped up. “You betta get up early an wash yuh clothes and sweep d yard miss lady. If you tink you sitting down infront dat TV before you do dat you lie. An John ah doh want you to encourage her neither. Make sure she do she work first!”

Melissa finished up and asked “Mommy ah could watch Zena? Ah finish me homework already”. “Bring it let me see,” Mommy replied. Melissa raced to the bed room and brought back the exercise. “OK, but doh sit too close to the TV it go damage yuh eyes and doh put up yuh foot on me chair. Ah fine these days allu have a nasty habit cocking up allu foot on me chair”.

It was Zena then bedtime for Melissa. She awoke the next morning to the sounds of potspoon stirring a pot. For awhile she was disoriented. She raised the blind and looked outside, it was still dark. ‘What the hell mommy could be cooking this hour?’ she wondered. Then she remembered – West Indies playing today! She jumped out of bed and raced to the kitchen, she could see the pot bubbling away. From the smell she could tell it was beef soup, the potatoes and carrot were in a bowl by the stove just waiting to go in.

She sat down at the table blowing on the cup of lemongrass “Ah serious what ah say you know Miss. Melissa, you not sitting infront dat TV today if you ent wash dem clothes.” By the tone of her voice Melissa could tell she was dead serious. Dragging her feet and grumbling under her breath, Melissa headed outside. “Likkle gul, yuh starting to smell yuhself? Wah you saying under you breath dey? You better swallow it! Only one female crab in dis hole an’ is me!”  Well wah d ass ah hearing dey? ‘Likkle gul’ she continued ‘one box ah giving you eh, you seeing stars!”

Resentfully Melissa started washing the bucket of clothing with the blue soap, at least it wasn’t her father’s clothes this week. You would swear the man does roll in mud fuss he clothes does dutty.

An hour later she was ready to rinse, blue and hang up. She sped up as she heard Daddy turn on the radio inside, you could tell the game was about to start, the unmistakable voice of Michael Holding was smoothing through the airwaves. Melissa loved to hear him speak, often fantasizing about him in her secret girlie dreams.

This was the time she loved the most, a love of cricket was one of the few things they shared. Daddy would often wake her up at the crack of dawn when the West indies was playing in different time zones like Australia and New Zealand. Cricket was a true family love.  As Melissa bolted inside, clothes still wet from having to lean on the sink to wash the clothes (she was quite short) she inhaled the lingering smell of colouring in the kitchen.

She raced to the bedroom, changing quickly and dashed back into the living room to settle in. West Indies had won the toss and sent the Aussies in to bat. One by one the other members of the family dropped in, Daddy had left the door to the verandah open and you could hear the cheers from the rum shop floating on the breeze every time a wicket fell.

Ambrose and Walsh were the lead bowlers, crashing through the Aussies defense. Carl Hooper had also taken a few wickets, his deceitful sleight of hand was a joy to watch and sparked many conversations around. By lunchtime the house was full, the drinks flowing, the peleau shared and the laughter raucous as the men debated the West Indies strategy to win. The Aussies had put up 196, so 197 was the magic number.    “Ridley batting good these days man, they should put him higher up the order”, one said. “To do wat? Aunty countered, ‘Shane Warne go eat dat up, leave Lara to take care of dat, ah have confidence in dah trini!”

Everyone settled down after lunch, this was intense time of the game. Even dogs knew to beware, no unnecessary barking when West Indies trying to win a game. The innings started well enough, the two openers did a great job of getting to 63 before the wickets started to fall; 1, 2, 3 – the elders were starting to get a bit nervous “Once Lara stay in there we good” one murmured “Hmmm…ah hope Warne doh take him again this time” another answered.

“Momm…” my cousin started “shussssh little boy!” “You doh hear big people talking! Ah doh know wah does do these children of today. Before time, little children were seen and not heard, nowadays dem children playing big man an woman.” A mumur of agreement rippled through the adults and then silence:- West Indies had lost another wicket they were now 175 for 9; you could literally hear a pin drop. Out walked wicket keeper Ridley, the last man standing. You could tell the adults were beginning to lose confidence that the Windies would take this one, Warne was teasing and drawing the batsmen into dangerous looking shots. But run by run the pair at the wicket began to look a little steadier, a 2 runs here, 3 runs there and suddenly the Windies were within 5 runs of the win. The air was electric, the kids feeding off the energy of the parents were bouncing off the walks, the adults had begun to stand, shouting at the TV. “Come on boy! Slow and steady!” ‘Yes, that’s it, doh rush, you have time!” I more Ridley! Boy doh make ah vop dey an’ out you know! When the winning run was hit the house erupted in cheers, echoed by the shouts from the rum shop down the road. Suddenly the streets were swarmed, Melissa briefly wondered where everyone had come from but was then too overcome by joy to care.

Because we are the West Indies!

I think I need a new pen!