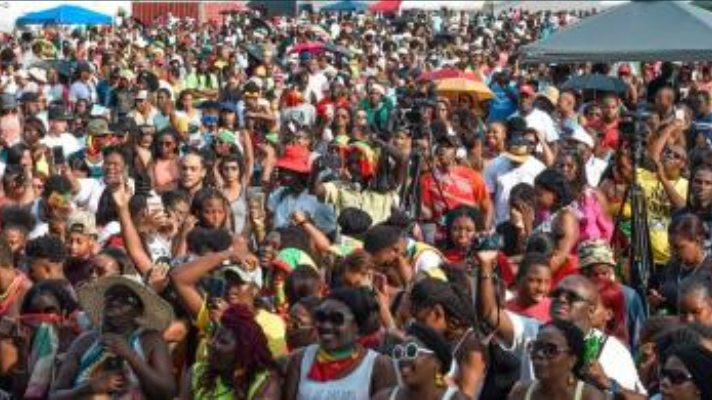 While I have noticed an improvement with the musical and dance performances during the Grenada Day celebration (NY) event in terms of choreography, attire and the musical acts/rendition, the one area that seems to be screaming most for improvement would be that of its host (Master of Ceremony or MC). The usual person filling that role is someone supposedly funny and well known, as was Hercules in previous years, and currently the Hitman Inspector, Elimus Gilbert.

To be unbiased in my disposition towards such key role and specifically the individuals I just mentioned, I would like to make it known that I love those brothers dearly, and have personally been acquainted with Hercules for a number of years. We have always enjoyed each other’s company whenever we meet. And for Inspector, he has been my favorite artist growing up, both for his lyrical prowess and his performances. So, why I am not satisfied with their roles as MCs?

It has to do with their particular style, albeit they are stalwarts of our cultural heritage. Those two entertainers, whom have been the ones I have witnessed, plus another whose name I am not privy to at the moment, rely heavily on their comedic personas. For Hercules, he is that way on and off the stage; such is natural with him. Inspector, on the other hand, it’s more of an act seemingly, and that is okay. What I do not find to be okay is that the nature of those jokes hardly seems entertaining, with very little audience participation or reception: as though the words are merely filling space.

Those jokes, which can be very demeaning or belittling in nature, deprive the event of much dignity, even when it is perfectly okay to inject humor in such space for amusement. The creative drought sustained between acts could only turn one’s attention from the stage; and I mean hardly by choice. Therefore, the cohesiveness of the show, which is the primary responsibility of the MC, is undone from the jumpstart. The center does not hold, frankly. As a result, the performers, especially the singers, bear the undue responsibility to warm up the audience each time, even when they are oozing with excitement and great flair, to share their artistries.

Apart from the jokes themselves, as freshly witnessed on Sunday, the literal screaming by Inspector to emphasize certain points or merely at the ending of a statement reflects an absence of an MC’s charm or natural sway with the audience, as the manner of speech exhibited seemed very forced, as though to make up for the natural grace and charisma of a master of ceremony. In fact, much of their performances as MCs has to do with telling these jokes, as indicated earlier, that hardly anyone is openly laughing with or at. I would assume that most people in the audience are both used to and apathetic at this point. Moreover, there is very little being said about other points of interest, such as sharing of vital information of the biographies of the artists and dance theaters, or even updates of things of significance happening back home, outside the usual announcement of upcoming events.

For the key place an MC holds in any live event, it will be a significant shift and improvement should the organizers of the event employ the service of someone with both a friendly disposition and is equipped to be informative and demonstrate the utmost respect for the audience, while poking fun at various intervals with tact and diplomacy. The image created in the process should not be construed for a hurry-come-see-this-act kind of event.

This one role, if done properly, would honor better our national heritage and ancestors, for it will espouse a level of pride and dignity that we are seeking to garner and promote in such events, but currently is evading us to the degree that is it warranted. The patriots and patrons visiting Boys & Girls High School field in central Brooklyn in years to come (or wherever it is held) will leave with their spirits lifted and an inch taller in stature. And the master of ceremony would have led the charge in doing precisely that, at least in my humble opinion.

This is a guest post and our Guest control their own work and posted freely to our site.